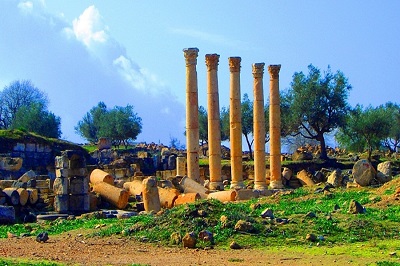 The Decapolis (meaning ten cities in Greek) was a ten-city Greco-Roman federation, or league, occupying all of Bashan and Gilead in northeastern Palestine and is mentioned three times in the New Testament. The territory was contiguous except for Damascus which some believe to have been an honorary member. Eusebius records it as the region around Hippos, Pella, and Gadara.

Created under Pompey the Great, about 64-63 BC as part of his eastern settlement, the league provided a formidable means of defense on the eastern frontier of the empire. Such leagues existed in other parts of the Roman Empire for purposes of trade and mutual protection.

10. Scythopolis “city of the Scythians” (Bet She’an); the only one of the ten cities on the west of Jordan.

Each city was a free-state (polis) whose territory included numerous small villages and rural settlements, endowed with certain privileges. The Decapolis dominated trade routes in the region bringing about prosperity and funding for public art and monumental Greco-Roman architecture such as the one found in Gerasa.

Fertile soil and temperate climate encouraged the practice of intensive agriculture throughout the region. The presence of a significant Greek population, who settled in the region at the time of Alexander the Great and the Seleucids, is consistent with there being swine kept by the people of the Decapolis.