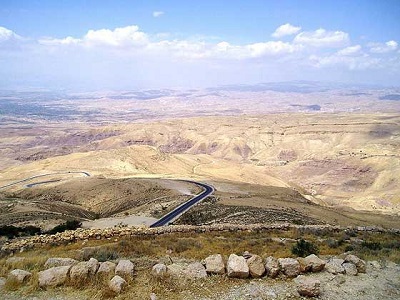 The King’s Highway is one of the oldest trade routes in Jordan–a remarkable fact in the context of this country which lay at the heart of many of the ancient world’s key trade routes.  The route, which runs along the mountain plateau above the eastern side of the Great Rift Valley, connected the Biblical kingdoms of Jordan (Edom, Moab and Ammon), hence came the name “King’s Highway.”   In the early 2nd century AD, Trajan used this route to build his “Via Nova Trajana”.  Trade caravans moving between points in Syria, Asia Minor, the Arabian Peninsula and the Far East,  passing on to markets around the Mediterranean, in Egypt and on to Europe used portions of this route.   The passage of trade caravans brought prosperity to the inhabitants of lands along the route and, ironically, catastrophes as well.  Many battles were waged throughout the millennia for control over the route and thus the trade goods traversing it.  The King’s Highway, or key portions thereof, have been used continuously from the Bronze Age right through contemporary times.